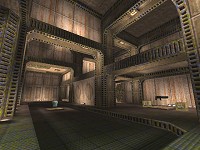 Think Balls to the Wall by Yogi (Yog1dm1) and you should know the setting. This isn’t quite as visually impressive but does put the ikbase textures to good use. Great hulking supports are everywhere, inset with all manner of panels. Lighting is very good with lots and lots of spotlights. There are couple of damaged lights that flicker, which have been kept out in the side corridors and not in the main playing area as not to annoy.

The lower deck has a tall, hall like appearance to it with the arches reaching high above. Exiting the ground floor is different from the norm and is via two teleporters. On the next two floors the headroom decreases, but not so much as to make it feel claustrophobic. They’re also connected by more conventional means (stairs to you and me).

At first the map seems rather big and not best suited to 1-on-1 but after a while it turns out this is definitely not the case. Some elements of the layout seemed to remind me of Bal’s Scrap Metal (Baldm6). This is probably down to it being heavily interconnecte 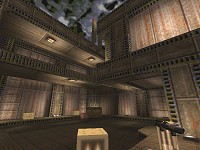 d, with lots of nooks and grannies to sneak through. I thought the gaps located in the floors would be a pain and I’d be accidentally falling through them, but the odd thing is I found them genuinely useful, as a quick means of both escaping and catching up on an opponent.

Scampie has kindly supplied us with just the one power up, the MH, which is surrounded by slime and is tucked underneath a curving walkway. Anything more powerful would have caused chaos and would have destroyed the fun to be had. As is I found it to be a very even game with no one getting an upper hand.

Oh, and one final thing, as Scampie says DM encourages love and friendship! Not quite sure how, but its worth a try.

Yes. DM encourages friendship by bringing people together unlike SP where you sit alone in a dark room playing with yourself.

"where you sit alone in a dark room playing with yourself" -- sounds familar.... /me glances over to killaz

Well, I like almost anything that is at my level of mapping expertise or higher (which would qualify a lot of maps). The Ikbase theme is one of my favorites.

In DM you sit alone in a dark room playing by yourself, too. Unless it's at a LAN, where you might as well play co-op :P

yes, then you'd be sitting in a dark room with friends, playing dm. Because playing sp at a LAN is just abnormal behavour

scampie why did u steal the agenda antennas ?
and they dont fit to the rest of the map imho :p

they aren't noticed by anyone... i call them hidden tributes