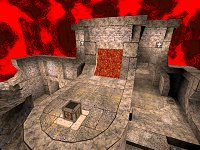 Very slick medieval/Lacrima Christi style map. Although it may not be up to the latter’s standard it is certainly more than competently constructed. Lots of strong stone work with plenty of variation in detail, both in textures and architecture. Also on the plus side against Lacrima is that it doesn’t suffer from being as dark, although there seem to be one or two spots where lighting had no source.

And whilst I’m grumbling, some of the clipping on the rocky outcrops is a little brutal and I did manage to somehow wedge myself in a particular spot and was unable to move. However, these are very minor things and don’t have any real diminishing affect on the map.

It’s a fairly compact level made up of 2 rectangular shaped floors. Various staircases jut out on the outer edges in order to connect up the floors, but other than that, learning the layout is a no brainer. It’s extremely well connected too and movement flows very nicely. As far as its spec is concerned, it more than meets up to it. 1-on-1 play is where this excels and with so many different routes to choose from, capturing (as well as escaping) your opponent is easy.

Weapons are in good supply. The RL was my weapon of choice (cue Christopher Walken flying) with a shed load of ammo at my disposal. The same is true 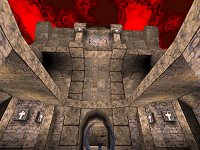 of all items; there is a liberal scattering of health packs to help keep you topped up and two YA’s, which turn out to be more than enough.

I did find the placement of the Quad a little intriguing. My first thought was that it should be more out of the way, for example swapped with where the MH is, but after some play I found it certainly helps where it is. If you’re getting a pummelling you can snag it and get yourself back into the game very quickly. And speaking of the MH, as shown in the first screen shot, its placed on top of slightly raised platform which is accessible via the maps only teleporter or via grenade/rocketjump.

The end result is a well-rounded map made primarily for duels. I look forward to more from zxc.

/me HUGS Paul
/me invites Paul to #terrafusion, someday, somewhere

This is a really good map.
I look forward to the next

Keep up the good work zxc!

#15. Laughing My Ass Off is afraid of typing too muc ^

a good a areana full of lots of weapons.
Full marks
Laughing My Ass Off