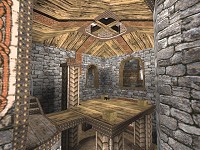 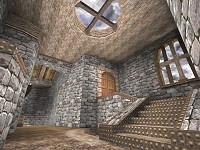 the reason the r_speeds in this map are high is that it's a boxed map and there's a huge box around the map and there's even a big hole where you can jump into the box. :X

seriously though, either this is the wrong version, or, well... I guess it *could* be that, I really forget though, it was quite some time ago. I do doubt I would have done something so amateur as that though, even in... June was it?

unless I just got pissed off and wanted to release it, heh, but I've gotten more pissed off (Coe, Rapture) and released without much lazy arse shortcuts..

anyway, I would like to comprehend whatever other language folks are using here, but, whatever.

I forgot to check the r_speeds. Looks like I made a lazy arse shortcut too :).

Yeah, someone who speaks Polish and English, could they translate the stuff in post #6, #7 and #8. /me points at MisYu

what sucks doubly is that the big black square in the middle of the sky actually looks pretty cool. stuff outside the walls is always neat, even if it's indistinct.

looks bright and un-quakey. But a nice change.

actually, ADD2 was a case of trying to track a stupid leak that appeared as the map was *done*, because I had added one little secret. Anyway, that's one map, and no it does not have "sky all around it" like some giant skybox (do you think I'm stupid), it was just some rather tacky leak-fixing at the last minute.

this level is very good and i like playing it

At first, I wasnt insulting you.
At second its just stating plain fact, not blaming you niether putting any map down

Very sad to see you react this way