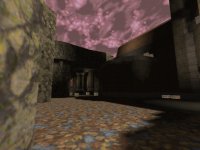 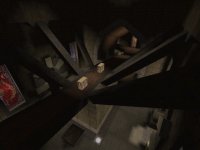 I gave this map a 2 cos I dont get on with Long distance gameplay, it just doesn't work in Quake for me... Hence the 2 score.

My scores hardly ever reflect looks though, normally just the gameplay, looks is an added bonus :)

that gameplay is more important than looks, a map can look good and play shit and be shit, but I thought the gameplay was better than a 2 and also if the looks affect the score any they should have brought up the score a bit.

This is easily the biggest DM map I've made and playswell with teams of 3 or 4.. but my next set of dms (except for the crocodile tears sequel, heh, which kind of sucks and I may not release) will be faster and tighter, and much better for FFAs with only 3 or 4 players.

I canna even play this dang thing! yes, quake crashes windows into the blue screen of death every time i try to run it!

I'll just have to build a mental picture of this one. You know what they say about books, "the pictures are better"

Well are you running WinQuake or DosQuake?
Other than that...I wish I knew..

I always run GlQuake. I was able to play "Purity" but the others, House, Dogs and Elder Sanctuary have all failed to run on my system.