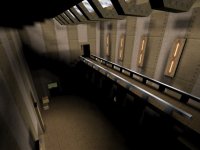 "The Missile Base" is a small and very enclosed map consisting of two areas. The map has heavy influence from dm3 as the outside area clearly shows, but unfortunately does not even come close to dm3's dated looks. The map is boxy and uses a horrid custom texture for the hand rails of a bridge in the inside area. Lighting is bad and some place 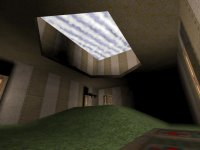 s a pitch black which makes it hard to navigate.

Unfortunately gameplay isn't too good either. The horrible full dark areas combined with numerous clipping problems means that you cant see and get caught on the sides of doors and walls quite a lot. In the authors defence, item placement is quite good with the rocket launcher in the center of the outside area and the grenade launcher up on the bridge in the inside area.

overall a not so good Dueling map that may have been better were it not for the numerous errors in it.

Were you playing the other night then? I can't remember. Much fun was had on almost all of the maps. I remember sm25_werd being one of the most fun to be honest, it was extremely mental and enjoyable.

Some of the other maps kicked some ass too :)

Were you guys playing on QMass? I want to get in on these maps so badly..