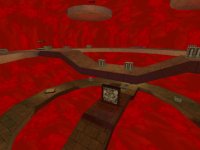 This map comprises of one large open arena hanging in the void, the arena is comprised of rings at different heights with a few connecting "prongs" that go through the center of the arena. It's not very inspiring stuff with the lack of any real structures or eye candy, but the rings are very detailed using lots of curves for a smooth effect.

Unfortunately the map isn't much fun to play as you just keep on falling off and respawning back at the top. This gets very repetative and it makes actua 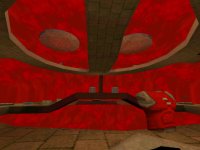 lly scoring kills very hard because as soon as you hit your enemy he goes flying off the map and starts back at the top where it is easy to get health and armour back. 4 player FFA wasn't much better either, in fact it was exactly the same but with more people falling off the map...

item placement is far from great. Crap loads of rocket ammo at the top and crap loads of armour and health at the bottom. As you can see from the screenshots it looks a mess and doesn't require any skill or strategy to obtain the good items.

Overall I was not impressed with this map. The author needs to concentrate more on gameplay and item placement as he clearly knows how to make a map.

I am told that this map was designed specificly for a custom engine designed by the author. I haven't checked it out myself but apparently it looks MUCH better in this engine. You can download the new engine (Which incidentally is a QW engine, so multiplayer only) here

Looks bloody awesome if you ask me :)