Base of two deaths 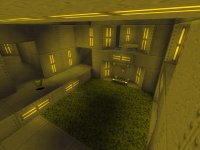 A great little 1 on 1 map from Lord Asaki and one which many a game can be fragged away in. The Id base textures look great with the yellow light fittings, and if you are using TomazQuake or other colored light supporting engines, then the overall effect is very...Yellow. The map is very small, as you would expect of a 1vs1 map, just 2 areas with a few corridors connecting them. its this simplicity, which makes the map shine...

1 vs 1 Deathmatch is simpl 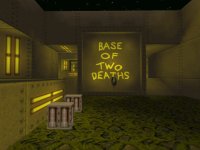 y brilliant, the slight delay on the teleporters is a great touch and creates so much tension when you KNOW your opponent is right behind you with his rocket launcher aimed and ready.

Of course no map is ever perfect and this one has a few problems :

- There are two many big items. A quad and megahealth lie 1 jump away from each other, while yellow armour is very short walk down a ramp from there.

- Some clipping errors can cause you to get stuck on some ledges.

- There is an awful custom texture depicting the maps name on the wall.

if you can live with these anomalies, then you have yourself one great map!

Is it playable without using regular glquake? I don't have any executables that have color support at the moment. :(

Ignore the without. I apparently was not thinking when I was typing.

Cool =) The pics look a bit yellow, though...they don't look that yellow in the game. Ok, on to some comments. The yellow armor is in a good place, cause before I had it on the ground. The Quad is there because when I was playtesting, the other guy was always by the RL. The MegaHealth is just there cause that's where it was in the original map...maybe I should remove it? I know the hand-drawn sign is ugly...and I KNEW someone would comment on it =) If anyone cares to draw one for me, to make it look more like a neon light, lemme know. And finally, I'm not too good with clipping, so if anyone wants to help me out with that, it'd be great. Thanks. BTW, this is just the QExpo release, I was planning on releasing a better version after the QExpo, get it fixed up a bit. A few people also told me it'd make a great Rocket Arena map, so I might make a RA version of it.

it's a cool little 1v1 map Asaki. I'm glad u took out that weird looking computer detailing too as i think it looked a little outta place before :) i really do like the minimilistic style though and it makes a change to see a map that doesn't have to rely on great looks to be a good map :) nice one

The ultimate triumph of gameplay over looks! Good over evil! This was simply mad with 4 players... I loved it :)

this maps gameplay officially 0wns me :)

E-Werd 0wned me when I was playtesting this =)

I finally finished this map and DaZ re-reviewed it.