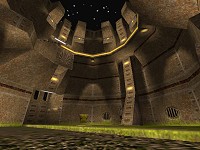 GlassMan’s first Quake DM is as visually impressive as his first SP map. Sharing some elements from the latter hasn’t done this map any harm. The map is spread over two gratuitously sized circular atriums. Its reach is further extended by selection of smaller atriums and corridors. Surprisingly r_speeds only creep over the 700 mark in a couple of spots, which is impressive given the open nature of the large atriums.

The level of detail is very high, from chunky support beams that rise up through the floors (nice touch I thought) to the circular underwater tunnels. In fact most parts have some kind of curve or slant to them. This is mixed together with the mkoxide texture set from the ever jolly Lunaran. Things are further enhanced with the lighting. There is a heck of a lot of spotlights, strip lights and wall mounted lights giving off a nice smooth glow.

Play is also suitably gratuitous. The sizable layout does mean you need a few friends to help you play, whether they be real or bots. I only found one spot where the bots weren’t happy which is impressive given the ground they have to cover. A lot of time was spent in the lower sections of the map, especially around t 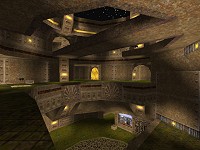 he slime surrounded RL, as people flowed down towards it. Movement is helped by various teleporters, and lifts are nowhere in sight, opting for the much faster trigger_push method.

Powers up such as the Ring of Shadows and Quad are tucked away. They’re certainly not hard to reach, but do require you to go out of your way. The same is true for RA, which is placed on the far backside of one of the atriums. Not that it is really needed, health is in plentiful supply and the other two pieces of armour are placed in more readily accessible areas.

The combination of the large playing area and epic architecture mixes together to make something that’s a real joy to play. Definitely one of my faves.

I'd happily help you out with Abcool3; even if it's only to the extent of telling how to improve overall design for future levels. I remember playing an early version of it ages ago. Don't have the file any more, but my email's linked on my nick above; send it over when you want.

your game is so cool