A jump into the insanity pit 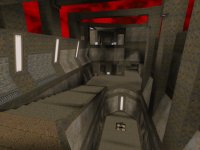 Now here is a nice map. Killazontherun has excelled himself this time and gone for an all out FFA map that plays great with 8 players. the build style is very good with most areas looking neat and quite detailed, some nice touches were the cylindrical holes in walls with slime behind them and the general open'ness of the map.

Gameplay is fast and furious as you would expect in an 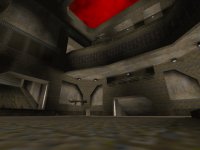 8 player FFA. As the map is quite spacey you have plenty of room to move which I liked and works very well here. Rocket jumpers and Bunnyhoppers will be in heaven on this one. The hottest area on the map is definately the grenade launcher room adn you garuanteed a few frags from above :)

The only downsides the spring to mind are that some of the items are placed a little strangely and it can be quite easy to domminate the map. But with 8 players running around this is a little worry.

All in all a great FFA map which should keep you entertained for quite a while...

I've enjoyed this map and it's one of the better new maps I've played.

So those who disagree can get lost and get themselves stuck in small cramped maps they play :)

really enjoyed this one. The large, open layout works really well, lots of fun to play.

although I did think the build quality was a bit unadventurous.