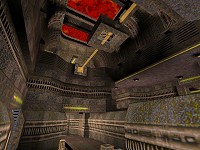 I have no idea what styles are used here but all I can say is that's its rather eclectic and could do with a lot of toning down. Floor textures randomly change and some of the wall textures are more pick and mix style than well thought out and considered. The architecture is good and for each theme it fits well, but a few maps separate maps could have been made out of each of the selected styles.

There is the usual Cheshire quirkiness with the curved liquid teleporters (which I thought were very cool) and the hovering lift that moves across a transparent beam of yellow light. The layout is made up rectangular circuit of corridor on the ground floor that connects to a zig-zag affair for the 1st floor. There are extra sections off there that seem bolted on and disjointed. There is an odd trigger_once message tucked up in the sky sections of adjoining corridor which blurts out "AntiClimax - Despise it." Not sure what that's about.

Playwise it's pretty rapid. In 1-on-1 it's well balanced due to the main atriums 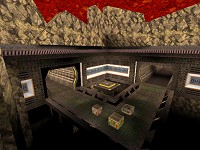 both having a good piece of armour and RL each. As such it's hard to be unequipped. Perhaps to overcompensate for one of areas having just the YA there is a quad that is nicely tucked away high up, but you can easily stop your opponent grabbing it by quickly firing a few rockets upwards. FFA is obviously more hectic due to the compact layout but doesn't suffer much. There are a couple of snag spots, the most obvious of which is the exit out of the wind tunnel above the RA alcove. In a speedy retreat it is possible to get blasted here, but this is a minor niggle, on a map that overall is very playable.

Stumbled across this review by accident :)
glad you were not too harsh on it Paul..the map was a giant experiment really which some people loved and others loathed.
As for the "AntiClimax - Despise it" message i cant even remember putting that in but im guessing i threw it in there as a joke since i knew some people wouldnt like "chesdm3" that much :P

Thanks again for the review though mate, enjoyed reading it :)

And I enjoyed playing it, the interiors look great and some novel ideas are used. Experimentation is always good, becuase if you get it wrong then at least everybody knows not to try that idea again :)

This map though gets it right...

CHESDM3 beats TOUM into the ground for the coolest looking map ever. Sorry man! ;)

This is a nice map. It is becoming one of my favorites. I've been playing it for a while now and I really like it. This map makes for really good 1-on-1 IMHO. I like the platform to the quad.