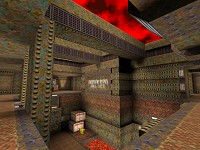 A more adventurous style map from moRgoth after Infernal Base. A cornucopia of textures from IKBase and Rubicon make up the bulk of the map. There are a couple of clashes but for the most part the mixture of texture sets works well. There are the obligatory crate stacks but they don't impede play so they're more for decorative purposes (which makes a change). The architecture isn't that

detailed with the texturing doing the work here but its still visually appealing.

The layout is made up of two double-layered rooms that are connected via a small hub section containing a LG and MH, which has been placed on a platform on the opposite site of a section of knee deep lava that is a piece of piss to jump. There are couple more dabs of open lava but you'll have to really try in order to toast yourself.

The lower bowels of the map are rather high and are just about rocket jumpable if need be. Clipping is good although I got buffeted about a bit until I got my bearings. Since the map isn't that big a low player load is more suitable.

I wanna start a fund to get Misyu a decent internet connection so he can get back on irc. I'll start it with 10 quid.

You shouldn't buy me a new internet connection but You should switch all USA-UK servers to something more familiar for me ;P
I'm not lagged, damn! USA-UK is lagged :)

It may be decorated well, but technically this is a box map.

noclip outside, then agree with me.

It's boxed because Morgoth was making this for long time and he get lots of errors.

One of them was leak, so he decided to box map to kill him.

My english rulez, but everytime I'm speaking to Dranz I become shy :}

I spent three months looking for a leak in my Q2DM6 conversion - got the bastard in the end.

Its probably just me, but this map brings back memorys of the grand old days of mapping. Ahh... nostalgia