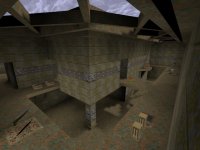 ParboiL returns with yet another nice playing but un-detailed map.

Ok to be fair this is a definate improvement in the looks department over his last two reviewed maps ( Debunk and Condemn ). ID's metal textures have been used well with some n 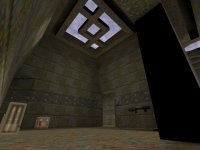 ice lighting and shadows which lifts the map up in the looks department, R_speeds are kept low also so slow computers wont have a problem.

Gameplay on the whole is very fun, either as a 1-on-1 or three player FFA match. The three player FFA's I played had some very fun moments thanks to the maps long tunnels and 3D gameplay. 1-on-1 wasn't as fun but was very tense, I jumped out of my seat a few times when someone popped his head around a corner and unloaded a pineapple into my gullet...

ParboiL definately has the skills and this map proves he is getting better with each release, but some more detail definately wouldn't hurt...