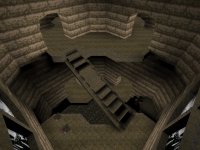 After an impressive first map (after the "patch") MutantBunny has returned with InfernalElvisman. And to put it bluntly its another Fall / fall 2 clone.

The basic idea of the map is that when you get to the bottom you teleport back to the top and start again. There are also lifts to ride and stairs to climb should you wish to go back to the top manually 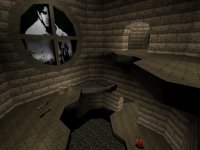 , these stairs are very frustrating tho as you need to jump up each individual step...

gameplay wise the map really isn't to good with more than 2 players. If you have played Fall or fall2 then you already know what this map is gonna be like. In the maps defence it does fair a little better than said other maps in that it has more than one room to run around in, 4 in fact as the map joins up on two levels and basicly runs in a ring around itself.

1-on-1 was ok but sometimes the map got in the way of gameplay (said stairs are very annoying when trying to run away...). Any more than two players and map just doesn't function any more... If your looking for a 1-on-1 map with a little twist then here it is...

I was prepared for a low score scince omicronbots kick themselves in the ass while playing this map, but that you would complain about my stairs!!!!! ;(

Yes only one set of "stairs" requires you to jump up them, and quite right, no one ever uses them :)

also from Mutantbunnies post : "I was prepared for a low score scince omicronbots kick themselves in the ass while playing this map".

We do try and play as many maps as we can online on a custom map server run by Jay, unfortunatly this map was not on the server so I had to play extensively with Obots...

The address for jays custom map server is "qw.peej.co.uk". If you are feeling like a game on there then make sure you have all the latest and all the classic DM maps downloaded and installed as iD maps are pretty much NEVER player on :)

I'll get this one on the server this afternoon.

MB~ the rest of your maps are on the server. It's "publicly administered," so if you'd like rcon pls mail me for it (mailto:[email protected]?subject=Arrgggh don't email me!?).

I've tried that map with 4 players, and I can say it really rocks! Very intense and fun map!