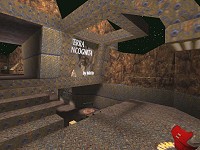 What a mix of inspirations for Misyu's first double digit map. Bal's "Dying Embers" (Baldm8) is the most obvious for the open topped rocky formations on the up most levels and the curving ironwork over the RA. The textures are a grim coloured mix mostly from Quake 2. There is the obligatory whirring and grinding noises from the wall mounted computer consoles and an unusual amount of signs and notices. A little more emphasise on detail would have been nice since it's a bit sparse in parts. 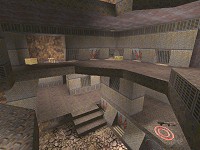 It does however play better than it looks. The layout is loosely based on DM4 except without the lava, thankfully. Its been designed to work best for duelling and it certainly manages that. The layout is pretty well interconnected with the slick drop down to the MH and the circular upward path through the map. I did find at times in 1-on-1 that ammo was infuriatingly low because there would be the odd occasion when I was going in for the kill and I'd then run out of ammo leaving me in the shit. This became a problem when the game was very close because you'd have to retool again to get ready. FFA is livelier but for me wasn't as enjoyable because it seemed too packed and cramped.

I can't get enough.