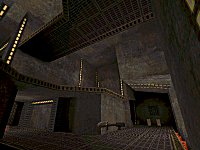 It's a small underground Q2-styled base, with lots of flat grey, a little lava, grille flooring; the design is a series of rooms and corridors around a central well. The Quad is behind a fairly obvious shootable secret door in a corner.

Now, the strange thing about the map design is the seemingly ineffective yellow strip lighting festooning walls and ceilings. Maybe MutantBunny thought it just looked good as striping, but to me it just looks damn peculiar. Also some of the acces 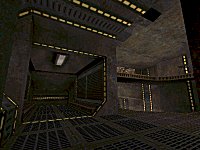 sways are very tight which could cause some trouble.

However, the big (score depressing) problem occurs when you fall into the lava (there are only two places where this can occur, however.) Sometimes when you respawn you reappear right back in the lava again!! God only knows why this happens, but it's extremely frustrating. Especially when it happens more than once in succession. Grr!

The weapons rack consists of one of everything; most of the power tools being located fairly close together in and around the central chamber.

Despite the odd texture/lighting effects and the irritating lava problem, I prefer this one of the MutantBunny's.

This map needs only a few things done to make it *really* good...

The Light/Trim texture looks really good and has been used fairly well except for the fact that the texture hasnt' been used as the source for lighting in a room.

The layout is actually very good imo, although the access from a side corridoor to the rocket launcher (top screenshot) has a lava hazard that makes it all too easy to fall in and as a result lose two frags from a respawn glitch.

Nice texture usage and atmosphere, but imho problem with this map is scaling and navigation- you can easily stuck on walls, extra few clips are needed.. And low scale (claustrophobia) makes this map bunny hop unfriendly and hard in navigation.

I just wanna thank you for bringing this problem up. I actually never noticed it and I have no ideas of what it might depend on. If anyone our there have any clue pleas pleas mail me.

hey, you have forget a "/" on the end of the URL to his site...
it's http://members.rediff.com/mutantbunny/

good work here. would've been much better if he had used more textures than the one grey steel texture. other little details would've helped as well (windows showing the sky or maybe small computers or other techie stuff beeping)

like mbdm01, it's a bit too cramped. there are also a few misaligned textures that i noticed. but i do look forward to seeing what this guy can do if he works a bit more on theme and widening his maps.

I am now workin' on improving this map, removing lavapits and improving visuals. If anyone would be intressted in testing please mail me at mailto:[email protected]?subject=Arrgggh don't email me!?

...for gameplay that is. This one is obviously better looking. Still, the light textures actually look pretty cool but the lighting itself is both flat and dark. The layout is confusing as hell. hmm. This guy definitely got my attention. Can't wait to see intergalactic (I couldn't download it either)