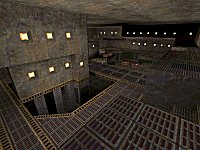 MutantBunny here has stuck to the style of Dr Bubba's Left Nostril, but switched concrete for metal. The result is mighty fine.

The map consists of one large three-story atrium with a pillar in the middle and one or two pods off the side. The upper two-thirds of the walls and ceiling are solid concrete with lots of recessed lights, giving the place a decidedly morbid, "sealed in" feel. (Paul reckoned the sky was missing, but then this map wouldn't feel as oppressive.) Floor panels are boxed in with brown metal edging; this looks nice and understated. Minimal and yummy. 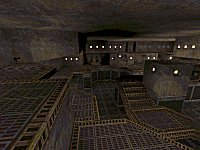 ghting is still a bit "unsourced" feeling, however. Despite that there's plenty of shadows to hide in.

Play is... well, with four on the floor the game was nicely paced, with that central RL bringing folks into the center on a regular basis. The GL may seem oddly placed, but in the close confines of the bottom deck it's killer. Most of the health seems to be on the top level, along with the nailguns for sniping practice. I can't imagine what it would be like having 16 people in here!

Another reason to hog the middle level is the Quad - it's behind a grille in a dead end holding a yellow armour next to the RL. And that's a mighty dead end if anyone catches you.

All in all, this one is a mighty fine slab-o-slaughter and well worth staying up for.

I really like this map's looks except for the careless texturing on the stair railings and the grey flash in software mode. some sky would have been nice. it may not have looked as oppressive, but it would have looked better :)

Unfortunately I didn't really like the way it played. It's kind of a cross between an arena level (e1m7) and a complex level (everything else) and I think those two types of combat weaken each other.