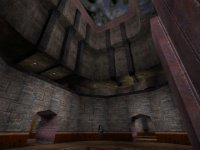 Jeff McWhorter returns with the latest in his Quake 3 to Quake 1 conversions. This time he seems to have got the hang of lighting and some of the shadows cast by the skylight are very impressive.

Brush work is good also with nearly all the features of the original Quake 3 map present and intact. obviously the map looks no-where near as good as its Quake 3 counterpart but jeff has tried to achive the same kind of overall look with use of TGA high res textures that will only work with TomazQuake, also Jeff has tried to achive the same rounded feel of the arches and windows but they still look very angular and a few more polys in there wouldn't have hurt.

gameplay wise unfortunately is where the map falls down. The areas are just too large for a Quake DM, yes they work fine in Quake 3 but that is a completely different game! if the main area and most of the surrounding rooms 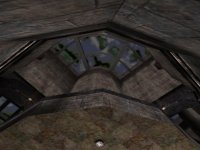 and corridors had been made smaller then it would have played much better. Item placement is also pretty much identical to the Quake 3 version (ie. bad) with the red armour, mega health and rocket launcher all a few hops and skips away, the item that makes the map fun is the Quad damage that appears in the center of the map.

if you've seen jeff's other Q3 --> Q1 conversions and liked them then by all means get this as it is the best one yet. But unfortunately the map is just too expansive to be a really good Deathmatch arena...

The map should have at been released as a normal bsp with the option for users of tomazquake to get an enhanced version. Agree?

The map should have been released as a normal bsp with the option for users of tomazquake to get an enhanced version. Agree?

I agree, a 2.5 meg zip is a little harsh to download when you dont use TomazQuake, but those textures do look sw33t! :)

I will upload it to Fileplanet tonight. Sorry about the big download, I should of thought about separate downloads for the Tomaz Quake users.

Damn Drannerz, you sure do seem to have problems downloading my maps. Anyway, Fileplanet should have it tonight. I gotta get a new website host!

Why do they insist on booting your ass so often? Not that I'm gonna download it(don't have Tomaz quake) but I just felt like complaining about them. :)

Plotonium - When you get that fileplanet dl sorted leave a message on this thread with the URL. This map looks quite nice, even if it does play like my arse

sort out that dl

The new release of Tomazquake (Version 1.44)doesnt work with this map for some reason. It says that it doesn't support type 2 and 10 TGA's. I'm gonna try and fix all the messed up textures and repost them on my site....

The thing stopping this map getting a higher score than two was the gameplay - Q3 styleee open combat across vast spaces blows in Quake.
As far as converting the map goes I think you did I good job - no b0rks, atmospheric lighting and everything looked quite nice. So the only thing holding you back is the fact you didn't make the base. Which leads me to say: Have a go at making a map from scratch.
You've got lighting sorted, I'm sure you can do everything else, and if you like Q3 maps so much use Q3 textures - they worked for me in DranzDM6. Go on, show us your skillz.

[If you've already made and released a map of your own the above advise is completely useless and I deserve to be punished for my ignorance. You may come round my house and spank my bottom]