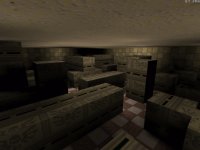 Why *OH WHY* does this happen? Don't some people have *eyes*? As you may have geussed already, Abcool blows *BIG TIME*. We all remember our first Quake map, that lovely box map using only one texture, a light with 8000000 brightness and 50 weapons all lined up in the center of the map. Well Austin must have really liked his first map cos *here it is*! For us all to play and enjoy!

The build style is.. Errr well, ID textures used to create some very *Un*-lavished rooms (if your lucky you might find an aligned texture, but I doubt it)usually consisting of 6 brushes (4 walls, a roof and the floor). Lighting makes the map completely Un-playable as it is either full*dark* or completely the opposite, burning your eyes out of your sockets with a 50,000 brightness strobe light...

The layout is non existent, as the map at its base level is just a load of boxes connected up by holes (complete with doors that make no sound when activated), oh wait, hang on, the map at its base level is exactly the same as the map looked at in game... Hmmmmm. yes connection wise your looking at a roundhouse trip in order to get from one side of the map to the other as no handy shortcuts are provided.

Ok, this map stinks. It is an example of a map at the lowest end of the low. Whatever you do just *dont* download it! (also nice of the author was to put the map into a instal e 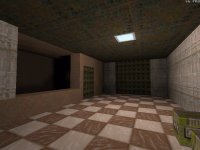 xe not a zip file, making the zip file over 600k...) But I dont want to leave this review on a wicked note. Some pointers for the author... Get the top ten MPQ maps! You can learn a heck of a lot from those about looks / layout / gameplay ect... That goes for all you people who have a map but are unsure about releasing it, also an in-valuable thing to do is beta test, give the map to a load of people you have never met and see what they say... Austin did none of this and unfortunately his first map turned out to be complete arse, *it can be avoided*!!

Oh and this map is not VIS'ed either :(

Another thing, as MPQ is between choosing an icon for the lowly 0/5 mark, this will have to do = 0/5

I too found it quite cramped which is disapointing, the lighting is adequate now, and whats this about not being able to reach the Quad Damage...... you just from the window on the top floor of the other side (with the bloke and his slashed back) you can reach the single crate from there and then jump to the others. :o). I think I did that to make people rocket jump.... but then again I think thats the only rocket launcher... doh!!! I think my best option is to maybe start a new map, as this map would be hard to extend. Wait for ABCool3, and it won't be a 6 hour job this time!

Qurnel asked me to tell You, that Your RPDM10 is great map, it has damned nice lightning & texture usage, nice contrast between upper base-floor and lower rocky-ground and beatufiul windows in walls.. :)

The editor can make a big difference in the map quality, as some simply don't have the necessary features, or have glaring bugs, that hamper good map building. Most top mappers use Worldcraft 1.6, although there are some people who use BSP, Quark, and Qoole. Be wary with old versions of Quest or Qoole, qED, THRED and Deathmatch Maker. The last two are notoriously bad. (QMD, if you're reading this, you really should switch!)

Thanks for that. I must say that rpdm10 has taken up much more time in making/testing than my other few maps. I'm very happy with how it turned out.

Rpdm6 is under re-construction but it will be some time before it hits the streets. For further information on this map go here:

and there is more info in the projects page.

Oh, and sorry to all users of netscape. The site isnt looking very good at all in netscape. And ignore the stuff about map reviews, as that is bullshite. Can't even trust myself anymore.

This was my first editor and I don't think I could change to any others.

"Be wary with old versions of Quest or Qoole, *_qED_*, THRED and Deathmatch Maker"

/me grunts and hides in the corner...

Grahf sayed: "...Be wary with old versions of Quest or Qoole, qED, THRED and
Deathmatch Maker. The last two are notoriously bad. (QMD, if you're reading this, you really should switch!)..."

Effectively, I've read it and I'M supposed to switch. Am doing these past few days some backup of so many files of cool maps I've done but never finished because like you said, Deathmatch Maker is THE problem. After reformatting my computer later on I WON'T re-install Deathmatch Maker Editor. It's time for me to try Worldcraft. I hope there is cool tutorials about WorldCraft because if it the support for the editor is the same like deathmatch maker, it will be hard to learn it.

Thanks to Fern and some the other hottest mappers at #terrafusion to make me wake up about the problems with the misalignment with Deathmatch Maker. I'm tired as well for all those problems loosing 5-6 hours of editing then suddenly the editor just crap in your face with the only possibility to press the button [CONTINUE], then it totally shutdown the Deathmatch Maker witout giving you opportunity to make a backup or something of your long hours of work :(

AM also the past few days not that much on Quake, spring coming soon, am loosing for kilos of fat accumulated since 1996 of those too much nights playing Quake 1 with people on the Net. The fact that Quake 1 is more a boring event when playing on the Net with those bots all the time ( when your suppose to know that I'm still playing only with my keyboard, without any .cfg file, pure Quake of the good old days in 1996); just pushed me off a little of the scene. AM walking 3.7Km/day +some little bit gym and I feel way lot better now. Lost 10 pounds in 3-4 weeks and I have to loose anothe 7 pounds. Once this reached, I'll be more editing probably; with WORLDCRAFT, of course!

Later all, keep up the good work everybody.

P.S.: Austin, listen those guys, they have alot of experience and me too, my maps aren't the best fun played by the people making many mistake about my textures home made, didn;t know what's going on with the palette of color and stuff like that... but if your like me, you won't never stop doing editing. You might be working harder, or less... but you won't stop.

Sorry XenoN, my qED rip may have been out of line. It's just an old editor, and got grouped together with some of the crap.