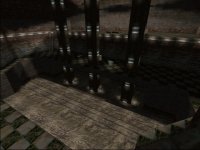 Twin Towers is a medium size map for 2 to 6 players to have a rumble in, the look is fairly original with lots of little strip lights illuminating the walls and hallways and large outdoor areas with cascading stairs. For a night time map the outdoor areas feel a little bright but on the whole lighting is good and the build quality is solid yet nothing amazing. 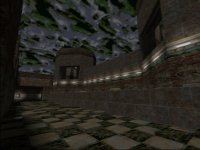 ameplay is where the map falls down though. the open areas are a little too large and some of the hallways are so long it takes ages to get to the other end. item placement is also a little haphazard with the grenade launcher and rocket launcher in very close proximity which leaves some of the map un-used.

Item placement that was good tho was the red armour and lightning gun. Sure you had to walk down a million mile hallway to get to them but the reward is worth it. On the whole a *just* below average DM map that shows promise from the author.

...the scale of the outdoor area. I thought that looked pretty cool. Dunno how it plays though since I've errr.. not played it.

But then, I've liked all of Jeff's maps (even tho they *always* get cut down here).

I beta tested both this and his q3dm6 conversion. I really liked the layout of this one..very unconventional.
Jeff's definitely got some skill - I bet we're going to see some great stuff come out of this guy soon as long as he doesn't get discouraged ;P

Is anyone else having trouble with getting this map? every time I try to get it, only half the zip gets home.

Its on MPQ now. Try from here.