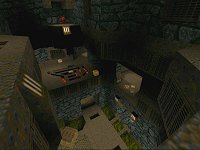 Blinking heck. This man is a machine. Last map I reviewed was Misdm8 and now he's back again with another. Its back to the tight, cramped layout of Misdm7. One very vertical atrium marks the centrepiece for the action in this map.

Visually the map is a bit of let down in comparison with Misyu's two previous strong looking maps. There is a set theme which appears to be some kind of underground stone cut bunker, but it's a little inconsistent (with some texture misalignments) and some of actual architecture is crude given what I know Misyu is capable of. As example, look at t 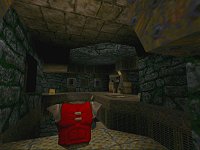 he rock formations around the RL which look particularly dodgy.

I can't however fault how it plays. Similar in essence to Vondur's vertically inclined maps Zed2 and Hook. The layout is slightly disjoined and there are sections of floor with open drops that until you've learnt the map will cause the odd problem. The different floors aren't too far apart and you can hop across between them with ease.

The GL comes into play what with the long air tunnel that can be used for firing grenades up and the open atrium where you can fire 'nades down if you're a bit action shy. The LG is also very useful for whacking falling players, but is low on ammo to be able to do that all the time. As far as playing numbers are concerned both duelling and FFA work nicely.

are the "windows" in this map facing the RoS (for example) anything remarkable when it comes to gameplay? I haven't played it yet but they caught my eye when I first looked.

Thanks for comments guys :)

I loved the layout of this map, but some of the brush work was a little odd. IMHO it should have recieved a higher score than three.

yeah 3 perhaps was pretty low.
to be honest, i liked the rock formations. they were unique, perhaps even artistic. sure they weren't realistic, but neither is the rest.