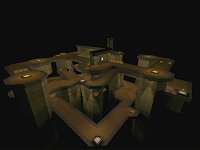 Mixed SP and DM mode maps don't usually work. However I'm pleased to say it does work once you've tweaked a setting or two. The maps layout is double edged. Whilst giving plenty of space and nice fairly connected area to use it comes at a price. As with all space/open air type maps r_speeds hit the 4 figure mark (1300) and there is again an unfortunate slowness to the proceeding. Grey flash appears in software and GLQuake gasps and chokes to keep going. After speaking to ELEK I set GL_SUBDIVIDE_SIZE to 1048 which helped no end and made it very playable. I also found out the command only works in GLQuake 0.98 and not previous versions. Thanks to gibbie for the latest GLQuake exe.

Anyway, technical problems aside it's a pretty cool map both to play and in the looks department. Architecture is simple and to the point. Huge angled columns covered with slimy metal plating are surrounding by a small network of walkways. It doesn't all flow together with a small amount of hopping and jumping required, especially if you want the RA, MH and one of the RL's. One thing that comes across well is the lighting. Lots of downwards facing spotlights that show up well on the patterned walls. The aluminous yellow light fittings when seen in such 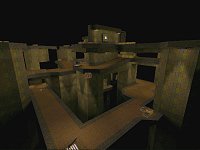 numbers are perhaps overwhelming but you shouldn't be looking upwards anyway.

Most of the play took place on the mid and lower decks. For some reason hardly anyone ventured up top even though there is a LG, SNG and YA. Ammo wise, there is a huge amount of shells and nails scattered about the place. I've not played the map in SP but I'd hazard a guess that that's the reason why. In DM though it was the bricks and mortar RL that was used the most. Due to the ammo levels though the SNG came up fav after that. 4+ FFA worked nicely but the map can easily cope with double that.

One final thing, set noexit to 1 so that clumsy idiots won't go through the teleporter and quit the level… not that I ever did that on 3 separate occasions.

How about Coagula3: Flab?

whom ever using black box around map again, dont use sky, use 1-face-per-box-side with normal black texture.
I mean just fucking stretch tex to have 1 tile per face ! -> 6 r_speed for box of any size

If you used the normal "black" texture, you'd have rockets detonating on the "sky".

But the real pisser is that for some GLQuakers the black texture could end up lit with a greenish tint as well.

Maybe if the sky was stretched by 2 or something it'd tile less. I dunno.

Why not make a black sky and stretch it?