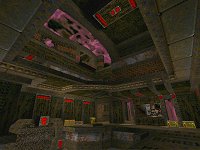 After a break from mapping Cheshire returns with this pleasant, mainly Orgo, decorated piece. This gives it a gritty industrial feel and even more so with the style of architecture employed. Lots of detail to look at, but in a few areas it looks cluttered and too much.

I thought clipping might be a problem given the angular, jutting out style of some of the architecture but there are no obvious snag points. My only niggle in that regard is the watery opening to the MH. The backend could have been lined up with 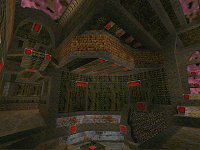 the wall instead of leaving a gap between that and the wall so you can have occasion problems dropping down.

The layout is made up of a couple of small rooms connected via a nice spread of player wide corridors. A liberal scattering of teleporters helps immensely in improving the somewhat claustrophobic flow the map has.

Play is rapid which should be pretty obvious given the small amount of ground to play with. The main firepower is provided by the trusty old RL. I tried various FFA combinations, since in 1-on-1 a player can easily dominate. 3 in FFA (2 peeps and 1 bot) seemed to be best since it evened out anyone dominating the level and was pretty much the max given the cramped layout.

That is some good texture usage! Oh and its a very nice map too :)

Nice Cheshire, Hmmm these feet are pretty good as well.

/me hands them around

chesdm2? Can I have one? What's the URL?

/me accepts some feet from DaZ