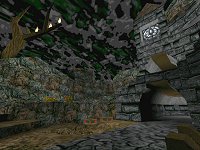 Looks like Misyu is on a bit of a roll. I was a bit hesitant when just after misdm7 he said he'd have misdm8 done in a couple of weeks. Well here it is, all done and dusted.

The outdoor architecture is reminiscent of Alice (or Zippie's 100 brushes map) with the tall, spindly towers and patterned window work. The interior is constructed from large grey brick walls that are inset with bookcases tilted at various angles. Most upper areas are broken down and dilapidated with the sky showing above that.

The main indoor area of the map is a sandy-floored L shaped corridor. The roof of which towers upward into an inverted V. Wall mounted torches are covered by crude looking criss-cross bars but the effect of the nicely fading shadows offsets that. I'm also not too keen on the teleporter design. Similar to Bigfoots efforts with the big cylindrical top and bottom and liquidly mass in the middle. Given that they've been placed in specially created spots, a more structurally and visually pleasing teleporter could have been created. But these are minor gripes given that the map plays as well as it looks.

Again there is lot of detail in here, but this time around it's concentrated to around the player rather than in front of wh 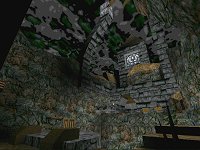 ere you need to move. The layout is relatively clean and movement isn't impeded. There are two floors the upper one is fairly small in size and can be navigated quickly. The main item of note up there is the MH.

The Quad is cunningly placed amongst two sprouting weeds, which isn't obviously visible, well I didn't see it straight away. This open placing actually works ok, because you can avoid someone whos Quaded up very easily by hopping in and out of the teleporters.

Misyu told me that it wasn't too hot with bot play but I have to say that even unrouted they were well behaved. There are a couple of open drops that will frag you, but they very rarely dropped down them. Duelling worked best for me, but it is designed for 2v2 teamplay.

This mirror for download is slower than shit in molases!!! WooHoo, 792 Bytes/second!!

You'll probably have it by now, but I've put the file on MPQ so, again, if anyone wants to download it they can do.

This map is very cool MisYu, it seems to blend very well from outdoors to indoors and there are some very cool ideas bunged in there, i haven't actually played it against bots, but then i hardly ever do play maps .. i just walk them :) ne ways, good work, keep it upx0r.

Jefe is such a sweetie ;P

(it's okay, he and I used to sleep together)