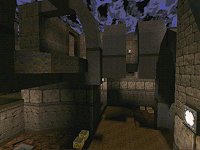 P3:A/Back to School style map from Asriel. Lots of large chunky arches and spacious walkways gives an accurate yet simple description of this map. The layout is almost triple layered and circulates quite nicely. Patterned stone and brick work make up the walls, and change from light creams and greys on the lower sections to browns and errr, greys on the upper sections.

The architecture is fairly simple. There are some wall mounted runes that work as a good source of light and a few stone cut portraits, but the latter seems more like a token gesture to spruce things up than a concerted effort to add visual detail. That said there are large sized archways and some semi-curved load bearing structures that add to what were empty looking areas in early versions of the map.

Lighting is a little on the weak side, with an ominous darkness that's like a fog covering everywhere. The lowest areas of the map were most noticeable for this because you'd be fighting shadows and just randomly trying to pick out 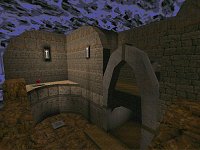 movement. Above ground level though there is no such problem.

Weapon and ammo placement is cunning. You can pick up a GL to have two boxes of nails sat next to it, or as another example one of LG's has two sets of rockets next to them. Not an obvious thing to do, but once you've played the map for a bit it all makes some kind of sense.

Play is mostly GL and LG orientated. There is a RL but its tucked away in a side alcove that also contains the RA, which is accessible via teleporter or rjump/gjump. FFA was excellent what with all the space to fight in but 1-on-1 was equally enjoyable.

Item placement was good but I didn't like the close proximity of the RL and RA. Just a little thing. Nice one Asriel keep up the good work :)

thanks for the review Paul, but when did you play an earlier version of it? :D

thanks for the comments Daz :)

I downloaded your map and when I went to extract it my maps dir it said I already had a copy. So I had a look at it and its an early copy of it :). Thing is I can't remember where I got it from.

The ZIP contains the .MAP of this map as well, the idea apparently being that Asriel knew that the brushwork was a bit rumpty and needed a fair bit of optimising.

He's right. The arches in particular. I haven't done them all, but Asriel, if you're interested I can send you a partial map that should save a few faces on those babies.

I love this map, you have room to breathe in it and it plays super fast, my fave part is walking up the stairs to the grenade launcher and seeing people running the other way with 4 grenades following them :)

Nice one Asriel, I look forward to your next DM map immensely...

Did I say that this map is so damn amazing... Oh yes I did, never mind then...

hehe, thanks heaps Daz, I'll try get another map done eh? :) hehe
I didnt think it was received that well, oh well.

I cant seem to make small, tight maps myself