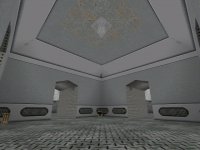 Ok, fullbright Un-vised box map time lads. What we have here is a classic "Should never have seen the light of day" type map. We all know the ones... At first glance I never noticed the gaping holes in the walls that lead out into the void, or the nasty custom textures, but I did notice the horribly fullbright lighting. My mind was telling me that the map was not lit OR vised at all but after a while of searching around (and finding more leaks) I eventually found what could be called "a shadow".

The layout comprised of a box in the middle of the map with a circular corridor running around it, this corridor is linked to the box in the middle via corridors every 90 degrees. The map is all on one level and thus no vertical fighting at all, the only way your going to get on top of your opponent on this map is to Rocket jump onto his head...

Combat is dull and uninterresting thanks to the 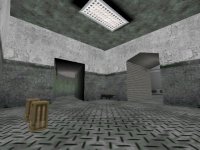 lack of cover, Z-axis support and lighting. Weapons and items seem to be just spread around for good measure with only the rocket launcher in the central area making any sense...

On a finishing note, some advice for the author. If you are going to release a map then make sure it is fully vis'ed and lighted BEFORE you upload it. Badly made / Un'vised maps run very poorly and generally show YOU up as a bad mapper... This map would have been greatly improved if there was more than one level to play on and lighting was much better.

#11. Austin_Brock chickened out of the title writing ^

Wooooooo........ after reading this, I'm glad my map might have a fighting chance, I played this one and thought, my mum could do better (Ok, she couldn't), but still as a first attempt its not too bad, I suggest using Worldcraft. Mine is my first attempt so please go easy on me! :)

sorry, clicked refresh, never knew that this would happen. :)

My first attempt was a huge box with one fairly dim light in one of the corners and several hovering cubes of water, with no exits or items.

OK, I should have the next map for you folks this week.

And I have a few optical illusions I thought ya'll will like... Which I haven't seen in any map before. It's just a one time... Woah... sorta thing... but I'll work.

Thanks for being so constructive, It HAS made me want to do ALOT better. and try alot harder in what I can create.

Bad: Releasing a newbie map just made for your LAN buddies rather than waiting until you've refined your technique.

Worse: Chastizing the poor, upstart mapper for taking a big risk, putting his ego on the line and publishing his first work.

"tho the gaps in the walls were due to the editor"

So how the hell did it vis?