Sex without a kiss 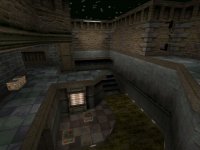 What we have here is a very nice map. Set out in a three atrium and multi-leveled plan and decked out in Kingpin textures, the map looks good with lots of sharp angles, individually made bricks sticking out from holes in walls and planks leaning up against ledges providing a handy alternative to stairs. The overall feel of the map is that it is set in a real place which has been cordoned off for a deathmatch...

Gameplay was fun and intense with enemies coming from above and in front of you (sometimes at the same time...) and it takes 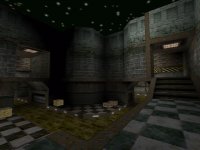 a while to learn where players may be on the map due to its complex layout. Weapon and item placement was spot on with lots of health and armour where you need it and weapons placed in sensible locations. Lots of kills can be had from spamming from above with the grenade launcher but the overall king weapon is the rocket launcher as all the rooms are medium to small in scale.

r_speeds are low throughout the map and no greyflash was visible in software quake so nobody should have problems playing the map. providing you have the omi route installed the bots play very well and get all the weapons and items, but sadly do not go for the Quad damage. All in all a very fun map for the close quarters specialist.

heh. guess you didn't like it as much as fatty. heh. that's ok.

actually, I think this map is definitely 4 quality work. I woulda given it a 3.5 just for the annoying ass clipping errors. :(

the map is fast, yes. but the flow is awkward and the gameplay is frustrating because of the clipping error mentioned above. you'll notice that you have trouble going up the stairs because the angle (with slope .5) that is bordering the stairs is flush with the stairs which are 16 units high and 32 deep. this causes a whack error that slows down movement and makes climbing steps all awkward.

don't worry. it won't happen in any of my next maps.

oh, and that clip brush border shit. scr00 that. a man's gotta have his slopes.