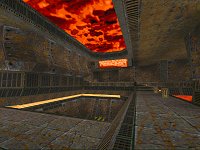 Note: The download is for all of the Reincarnation pack which includes 4 other maps.

The first map in the pack does give you a pretty good idea of what's in store for the rest of the maps. The map circulates around the area in the first screen. The long sides connect off to a swarm of corridors and small rooms. The unique element here though is like with Frib's Biohazard (EFDM7), blast doors are used which can be toggled via wall mounted switched to close them for a certain period of time. They don't actually block people into parts of the map but can help you to funnel people out of certain exits and therefore wait and nuke them.

Again the teleporters are numbered in pairs so you get a good idea of how they link together. R_Speeds could be considered a little high at 700 to 1000 in the open-air areas but didn't seem to affect the game.

There is plenty of detail in there for pure visual appeal if you can get into the mix of boiler house textures and grating. Gen seems to have this knack for blending perfectly normal sane architecture with twisted, bent and malformed (like with Reinc3 - Dysaesthesie) to give something that quite frankly at times is amazing. There is a honeycomb network of one-way drop down passageways that connect up the various floors and the unwary will no doubt fall down them due to their, at times perplexing, placement. As an example there is one h 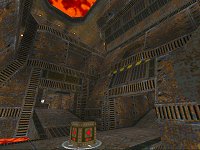 alf way up a staircase so you just fall straight down. I found that happened very often when you went up them backwards trying to fire at an opponent, but it does provide a very quick method for escaping. It was funny watching that happen, someone suddenly dropping out of view.

I also only found out on my last play that there is an jump pad tucked in along the wall sections on the mid level, I actually thought it was just part of the detailing. The dotted lighting texture was a bit of a giveaway. Anyway, it tries its best to throw you up onto the top level, but the slightest movement knocks you off course since its not that powerful.

I would seriously suggest just wandering about for a while working out the layout, but the same can be said of any of Gen's Reincarnation maps. The effort is worth it. FFA (or teamplay) is again the order of day.