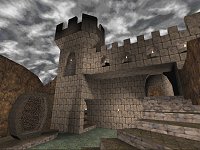 Medieval style map decorated in creamy whites and light browns. Similar to Pingu's Back2School. The setting is mostly indoors spread over a few rooms inside a castle. The layout is very compact with each area being made up of about two floors.

FFA is certifiably insane. 3 just about works, 4 is pure chaos and anymore is too much. The reason for this insanity has nothing to do at all with the fact that there are 2 RL's, and a GL and LG in this confined space. Nothing at all! Honest! (We'll also ignore the fact there is a NG, SNG and SSG). To say its well endowed in the weaponry department would be a small understatement.

The basic gist of which means it's meant for duelling only. You will certainly not have a problem tooling up. It's pretty damn fast and will certainly keep you on you toes. There is nothing like respawning, then hearing y

our opponent pickup a nearby item and then you panicking and running away in order to get going again.

Misyu's usual flare for hidden map messages is there, and if manage to reach the top of the circular tower seen in the first screen shot you'll see what I mean. There is a second message but I'm not saying where.

My main grumble is that it doesn't feel as polished as it could have been. The architecture doesn't gel together all that well, and whilst the huge curved dome sections in the roof are nice they don't really fit in with the castle theme.

1.5 / 5 points docked for "it doesn't feel as polished as it could have been. The architecture doesn't gel together all that well, and whilst the huge curved dome sections in the roof are nice they don't really fit in with the castle theme."?????

PLEASE CAN I HAVE SOME OF YOUR DRUGS AS THEY MUST BE SOME STRONG SHIT!!!

That's bollocks anyway, it IS polished (show us what's noticably wrong with the build quality??), and all the sections DO work together (what's wrong with a bit of variety in designs?? All other good maps have it...)

I know you're heavily biased against this map but at least you could have come up with some convincing "flaws"...

Since when have you seen a castle with fucking dome roofs??? I'd call that a problem with consistency. If you're going to pick a theme like this you might as well do it so it is believable (like Pingu did in his map).

Then there are the teleporters. They look horrible! It also doesn't have particularly brilliant architecture, there is nothing that really stands (yeah ok the tower is cool, but rather simple). And it's far too cramped. And your mother stinks of elderberries and I fart in your general direction...

Paul: You asked me to submit this map and then I asked You to write somewhere, that misdm6 is over one year old (built on nov'99).
Please, be mercy- this isn't fucking-new-mega-3D-r0x0r map, but poor and old brush work..

"Since when have you seen a castle with fucking dome roofs??? "

When have you seen a castle with teleporters? :)
Quake hasn't to be realistic, this is only a game, I think..

QurneL is polishing his "Teritory" and "House 2001", probably he'll soon submit it on MPQ.
I started MisDM8..

I'm with Shambler on this one, I love this map.

I forgot you'd mentioned that and that I should have mentioned it was an old map.
/me slaps myself

As you've probably already gathered, I'm not too keen on misdm6 where as Shambler loves it. Hence this argument.

As for the teleporters they could have been set in the walls and not have been free standing ovals.

Anyway, get on with MisDM8, I wanna see what you come up with :).

Plenty of "temples" have domed roofs. Castle isnt too far off. Personally, the domed roof in this map looks really classy. I mean, what was he supposed to put there? some boring old sky? I think he's done well in adding detail like that. Love a map or hate it, you have to appreciate it. Small map or large map, a whole shitload of time goes into them and its a shame to give something a bad name on a personal whim.

This map is überl33tx0r0wnzj00b4dmµtha! It's the first custom DM map I ever played and with four people on the LAN it gave us countless hours of friend-fragging enjoyment. And it looks Daaaaaaamn good. Forget polished, the thing practically sparkles. :P