Some people have described this map as messy but I'd said it's detailed. Barrels of toxic waste are placed with reckless abandonment, floor tiles have been torn up, bricks have somehow been removed from the walls and now are scattered across the floor, cracks are starting to appear and one particular floor section has crumbled away completely.

It has, however, adversely affected how the map plays. The layout is very simple, two triple floored rectangles connected by a couple of double L shaped corridors and a small flooded room containing a MH. The problem is that I think too much time has gone into making it look nice and not into how it should play. It is just not as well connected as it could have been and seems to flow like 1-way traffic.

Lighting is also a bit of a problem. It's more than a little dark in a couple of spots. Pitch black would be a good description. Most of the playing surfa 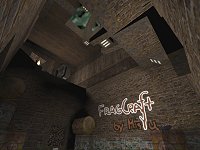 ce is lit ok though so it isn't all bad.

It is again, as you've properly guessed, best played 1-on-1. Frags seem to come in quick successive spurts and kept swapping between each player. That meant the game was fairly close throughout and I found playing to a frag limit was the most fun.

I would love to see Misyu attempt a map on a grander scale and see what he can do with his talents that way.

Finally, see if you can reach the two messages which have been put in a couple of ridiculous places without cheating (I managed it*).

I still can't actually strafe jump due to my weirdo config, but ages ago I learnt to curve jump, i.e. start the jump at an angle and curve back as soon as you jump, which gives you more speed, like a strafe jump but not as effective. MH in this map is extremely easy to get this way, RA is a bit harder.

BTW, I was using curve jumping at least 6 months before Q2 trick move guys like Julios (name?) discovered it and made a huge thing about circle jumping. In fact it's highly likely I invented it full stop as I doubt there is anyone else on the planet who is both interested in trick moves but can't strafe jump... Of course for me it was nothing to be proud of, it was something I had to use instead of proper strafe jumping because I sucked =).

#14. Does Circle (Curve) Jumping and Bunnyhopping in Q1 ^

really work the way it does in Q2? Cause in Q1 I can't make them effectivly (if at all).

Not quite as effective as Q2 but it certainly does work. Would you like a demo?? Pick a jump and I'll try it... I'll try to make it clear how I do it too...

...to gain some speed with bunnies. I don't get much faster than just walking. And compared with the awesome speeds in Q2 this seems pretty sloooow. As it is always claimed that Q1 is the much faster game, there has to be more to it... :)

when you jump, face diagonally in the direction your going... this is pretty hard to describe! sounds stupid but it kinda works like that. Maybe get a demo or something. face forward (as your running along) then, using the strafe key (left or right) move sideways as well as forwards, on this angle you can move faster and jump longer. BAH!, get a demo.

Things like this just come with lots of practice and screwing about. Ive noticed in Q3 that jumping as you move along can increase your speed DRAMATICALLY! Just keeps getting faster and faster, untill you are literally flying along.