Any Kind of Pain 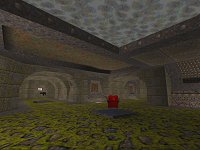 A bit of the old skool from Mr Debris. Blue stone gothic mixed together with some up to date architecture and styling gives something that's refreshing to look at. The checkerboard floor of greyish/brown and blue works well against the other assorted textures. The map is medium sized with a far bit of ground to play with and can easily handle more than 4.

It's split between dry land and water, with about a quarter of that being water. The three floors above water have nice variances in texturing. The bottom and top floors are in the same patterned metal texture with the middle floor done in a similar unpatterned version of that texture.

Against bots you'll find you'll spend half of your time in there so don't expect the bots to play too well. What you can expect is to hear those poor bots choking and drowning a lot. Again Skorpion's route does help but it the fault lies in the old Omicrons here. That said 3 way underwater rocket fights were cool. 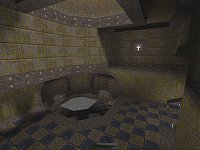 en't been able to play it against all human opponents (in FFA) so I'm just going to give it the benefit of the doubt in the gameplay department.

The quad placing is a dead giveaway to a player's position since its entombed behind one of the grates in the water area of the map. Shooting the said grate makes an extremely loud thumping metallic noise as it grinds open.

Only a couple of items of importance are in the water and those are the RA and Quad, along with a choice sampling of rockets and nails. I'd say against normal opposition you'd spend very little time getting wet.

This map is pretty damn good. All in Id originals (except for a few modified texs) Just enough 3-D to make it fun. The underwater area makes it so different, you are almost forced to go there but not that the action is confined to the one place. Love the looks, especially where the windows are in the rooms. Makes the scene. This one is a keeper. By the way, does anyone know how to disable poly distortion when underwater in GLQuake? that effect looks bloody rediculous.

R_Waterwarp doesn't work in GL, you need a custom exe.

DAMN. Its the one thing i dont like about GLQuake. Do you know which GLQuake.exe can disable such nastyness?