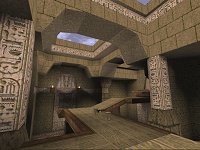 Tronyn's latest piece has strong echo's of his previous map (Halls of the White Wizard) with the suspended platforms and large airy spaces. There also seems to be a vague feeling of Unreal in here, and if some water had been in there you could have mistaken it for the temple sections of Unreal.

It is however more like a dust ball and given its setting you'd be hard pushed to find any water. The theme is Egyptian with huge expanses of light and dark coloured sandstone wall. Inset panels of hieroglyphics and paintings adorn some of the maps vast wall space. The maps layout is rather dispersed and spread out, and the actual surroundings are pretty grand in terms of scale. The open top corridors seem to go on forever. The uneven surfaces in the main indoor temple area of the map makes the mechanicals of dodging a little harder than normal, but does add to the maps aesthetic value.

There is some really cool looking architecture in here as well, the detail attained given the modest texture set is good, with some nice variation in detail. Parts of the map are also a campers paradise because you can 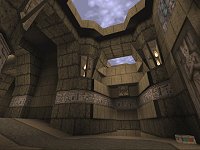 rjump up onto the highest parts and trundle about since none of it is clipped.

Unfortunately it doesn't play as hot as it looks. Its far from boring, just I felt it could be faster paced. Duelling is very slow going. FFA is certainly better but again definitely not as entertaining as it should be. Ammo isn't so much sparse in quantity, just badly placed in out of the way spots.

Secret hunters should be happy because there are 3 of them, of which I found just 2. The hidden teleporter to the Pentagram of Protection and the closed alcove containing the Quad (which I think was a secret, but the entrance to it kept randomly opening. I couldn't suss out what gave you access to it).

Theres something about this map that catches me. The architecture is really well done, half egyptian and half something else. I must agree with Paul, the gameplay seems to suffer from the dispersed nature of the layout. I will say this though, I could easily spend a lot of time just wandering around looking at everything!

it comes off more like it should be part of a sp map. I love it other than the fact it's a bit bigger than I'd like and in some areas it just seems like you can get caught on stuff, mainly in areas where it's supposed to look like something broke or a pile of dirt.

if this map was a bra size, most definately 32DD.

other than the fact it takes 8 omi's to stoke the fire, this map is very sweet. i agree with toad, for some reason this map seems to be sp dressed up in dm clothing. still good for a quick game, definate keep.

Yes I have to agree with ToadWarrior. This map feels more like a Single player map (and could possibly be converted Tronyn :-) but as it stands I enjoy it quite a lot. The one thing that stops me from playing over and over again is that most if not all of the areas are just too damn big! You can have a rocket flying at you for more than 2 seconds before it hits you in some areas and this spoils it a little. Apart from that the map is good and looks gorgeous