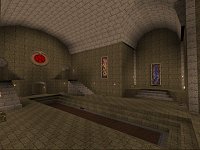 Reminiscent of Tronyn's "Halls of the White Wizard" in terms of scale and look. The setting is more church like and stained glass windows make more of an appearance. It's a fairly large map with four main areas, three of which are indoors with the final one set outside.

The architecture is average with some nice detailing. There are plenty of curves used, from the small to the downright huge, as visible in the ceiling in the first screen shot. The problem is that whilst the look is ok, 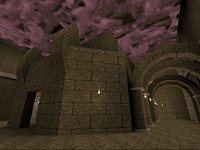 the three separate areas are subtly different and lack consistency. It's like the four areas a bolted together with a network of right-angled corridors. Nice looking corridors though, the floor is carpeted and links into the surrounding areas nicely.

As such the flow of the game is somewhat disturbed and not what it could have been. If it had been made into a more cathedral layout with the catacomb like section obviously at the bottom and two curved roof sections close together above that and then the open air section at the top, it may have worked better.

It is still fun to play though, the huge amount of playing area you're afforded makes for some interesting play. Mostly long range attacks using the RL, GL and LG. Lots of strafing and dodging.