Somewhere in the north 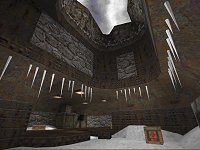 With the festive season just around the corner it is nice to have something that at least shows signs of snow. All open-air sections have a layer of snow on the ground and snowdrifts are scattered about in corners and up against walls in the corridors. I thought the combination of both solid blocks of snow and func_illusionary sections that allow you to walk through them was a real nice touch. There is one particular L shaped section of the map where by you literally sink down in to it, up to your waist.

The harsh grey stonewalls against the dark brown metal panelling works well together enhance the feeling of it being cold. Icicles dangle down from roof edges that are exposed to the open-air atriums. (Btw Fern, it was Hotcakes who first used the tufted grass effect, not Pingu :P). And these aren't textures either, they've been properly created. The brushwork as whole is excellent. The adjoining corridors look really cool, what with the stone cladding at the bottom which intercepted by metal panelling and then the curved ceiling textured in a mixed metal colour (which I think was used as floor texture in Baldm8).

Stacks of wooden crates and boxes have been used to make for quick escape routes, but easily give away what you're doing. Weapons and various other goodies have been placed in front of some of the teleporters as to, again, give away your position.

Lighting is generally subdued and the spots lights show up extremely well on white snow sections. The layout is fairly 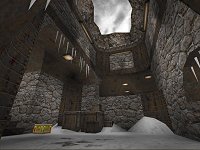 spread out across 3 atriums connected in an almost diagonal line. A lot of the linking is done via corridors, which whilst isn't a bad thing did tend to slow the game up a little.

In 1-on-1 it wasn't fast and rapid, more paced and gradual. 4 in FFA was faster, but I actually enjoyed duelling more.

As an extra treat, if you start the map in SP you'll be created by a graffiti style message of "Merry Xmas" in a hidden circular room which teleporters you off into the map proper. If you stand around for to long though, a message of "Nah… Chicken and Cheater! :)" appears on screen. There is also another message in one of atriums near the sky that tells you that it's a bit cold…

Note : I haven't tried the map out in software Quake, but I've read that the snow texture looks pretty bad. In GLQuake however it looks fine.

Yes, the snow has a terrible case of galloping fullbright-itis which will certainly stampede up and down yer Bazolikons.

I said nothing at all about who -first- used tufted grass. HMPH!

I always get them mixed up, even though what they mean is completed different.

it's not hard to remove them either... just open the .bsp in texmex when your ready to make your final compile (or ealier) and individually remove fullbrights... that's IT! it takes sooo little time to make something look that much better...

This is the best I've ever seen!! Awesome ambient... cool idea, all that snow stuff! (you can hide some grenades arround) the gameflow is just perfect for 4 players. I've been playing this map a lot this past days and I will be playing it in days to come.. so just a word: AWESOME!

Unless you don't know I have recorded a quite cool 1on1 demo on this map. I have it on my site, here is the link if you want to download it and check it out:

BTW it is a "qwz" demo, which is used for Qizmo/QW. So you better know how to play the demo. Or I think you can read how to on www.challenge-tv.com, anyway enjoy. This map so OWNS!
Skleros --- Sweden

sorry but the address didn't work. You can find it under the demos section.