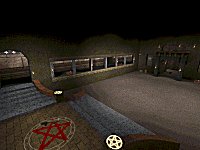 It's a box. A nice box, perhaps: one large hall with raised walkways along the sides, big sweeping staircase and cramped dungeony things on one end and a balcony at the other. Texturing seems to be a mixture of just about anything the maker could get his mitts on - metal, medieval, Rogue, Zerst—rer... Basically feels like a mess. Lighting is fairly bland and unimpressive.

Up to eight nutters can rampage around and most action centers about the centrally placed RL, right on that staircase. Nailguns and a grenade launcher are the only other weaponry, along with one yellow and one green armour.

But it's messy, a bit slow in the main hall, and a box. Or maybe I get bored quick.

by the looks of things the author has got a fair bit of knowledge and understanding of brushes. The curved borders around the staircase and arched doors prove this. He just needs to focus a lot more on the actual design and layout of the whole thing. Box's = bo||ox. I'm sure he could do a lot better with time and practice. one to looks out for I think...

reminds me of the stuff I used to make...

heheh i made a box level once!!

I wonder if anyone still has my real first DM level. It wasn't a box, it was five boxes and two hallways. It was inspired by the pits of carnage from Ultima Underworld with four elemental theme arenas. I wonder if that could actually be worked into a playable map? :)