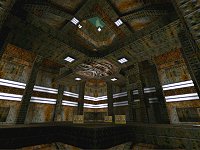 Elek's first DM Quake map is different. Different because it's certainly not something you'll have seen done before. The centre of the map is like a huge capsule with huge curved wind tunnels surrounding it.

I unfortunately felt like I was spending too much time travelling about the place trying to get onto some kind of solid ground so I could actually kill something! The main problem I had is that there really isn't some kind of flat playing ground to fight it out in. There are some surrounding flat corridors, the upper and lower floors around the capsule and in the aforementioned capsule there are 3 layers (2 of which are cross shaped as to give you room to filter down onto the bottom floor) on which to battle it out. It's not enough though. These areas are spread out a bit too much to give you nicely joined area to work with.

I can't, however, fault the Ogro texture set and Elek's execution of it. The semi-circular steel plated and iron ribbed air tunnels have a certain epic scale about them, and here in lies another problem. Item pickups are placed in the middle, which is good because it' 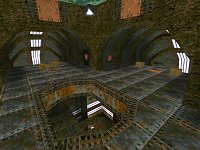 s consistent, but bad because I ended up going down past them most of the time (clumsy I am). The rest of the map is equally well decorated. The inner tube is structurally sound, with multiple outer supports coming up and around the walls as if it were some kind of internal rib cage. Strip lighting wraps around the middle level to give a nice constant light source. The slightly dipped crosswalks are another nice touch in this architecturally rich map.

I would heavily recommend routing the Omicron bots on this map because they were quite frankly useless without it. It is a big-ish map, so up the numbers slightly to get the most out of it.

Finally I got on a computer powerful enough to run this map with bots, and I must say it's excellent. There is one thing I didn't figure out though. There are several arrows in the tunnels pointing sideways. Is there some sort of ledge or secret or easter egg or something in that direction?