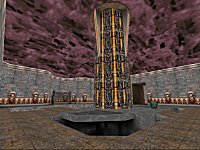 The map consists of roughly two (2) atria. The first contains the rocket launcher (next to the only rocket ammo in the map) and the jump pads, which work better than I expected but still had bugs. The other one holds the LG, the RA, and a bottomless pit that's poorly designed so sometimes instead of dying you can just get stuck for a while. There are some attempts at eye candy like some huge biomechanical-looking stuff and the lava pits you can't fall into due to the wire-thin bars covering them. This probably looks okay in Q3A, but I don't care because this is Quake and coupled with the lighting it looks blindingly ridiculous.

The most notable feature of this map is the lighting, i.e. there is no lighting. If it weren't for a handful of shaded areas, I'd swear the map was compiled without light. In a level that's almost entirely fullbright, you wouldn't expect to see fullbright software speckling, but the author has managed to b0rk that up too in the area containing the jump pads.

Texturing is a no-brainer 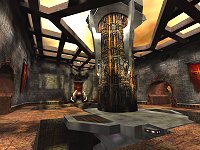 The action is about as nonexistent as the lighting. While ammo for the shotgun has been scattered around the map in unnecessary amounts, ammo for the two (2) large weapons is hard to come by. Gameplay consists of whoever gets the big guns controlling the map until being worn down by irate shotgun blasts or running out of ammo. For this reason four or more players is pretty lame. 1-on-1 could make it more interesting I guess, but in a map this uninspiring, I don't see why you'd bother.

Played it and it's ass. The original map wasn't that fun but it was nice. The conversion just need some more time spent on it.

I dunno where that came from, but it's a hell of a lot better than the q3a version I have...

Every time I try to download this, it only grabs about 275kb, then says that the zip is corrupted. FUCKING LAME ASS.

#4. ToadWarrior chickened out of the title writing ^

The 2nd screenshot is from Q3 so you can compare the Q1 version to the Q3 version.

members.home.net is a crap host and times out on me a whole lot too. I offered to review this one because it was the only one from this set that I managed to download intact. Good luck.

Can somebody please leave a large thermonuclear device at members.home.net? Their servers are soo sooo F,bad.