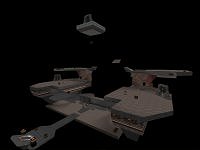 Jeer…jerrr…jerrrk…jerkyyy...jerky. Its slow, very slow. R_Speeds aren't exactly killer at around the 800-1000 mark but it ran really badly for some reason. In full screen at 800x600 most of the air jumps are impossible since it runs at such a crap frame rate. Windowed it does run better but there is still this vague slowness to the proceedings. To be perfectly honest I've never played a map before that was this slow and I think I can say it isn't my set up that's the problem here (p3-450 256Mb, 32Mb GeForce, mo 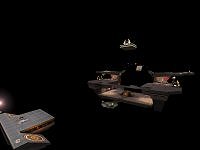 re than enough to run Quake with).

Again this is a fair recreation of the original and from the two comparison screen shots you'll actually notice little different.

Unfortunately, due to the aforementioned slowness it's practically unplayable. It also isn't as much fun. The railgun that was perched on the remote platform was a pretty cool sniping spot but now its just redundant. There is a LG there but it hardly has the reach to hit anyone on the mainland.

I personally think this is one map that shouldn't have been converted. I'm not a fan of space style maps and I don't think the Quake engine is either, since it can't handle the huge open space, which this map basically is.

I think that's the version of q3dm17 that I played before. It's ass and that's unfortunate since q3dm17 0wnz.

if i ever see brushes that resemble a quake three "arena" running via one "glquake.exe" i will be forced to kill said author with large, sharp, icky poking stick. that is all.

somebody tell this fucker to post some files that aren't broke. How does he expect people to play his maps if he puts up corrupt zips?

It would have been alot better if the jumpads actually worked all the time, and if you didn't take falldameage when they work

I cant get the rail gun thing to work but so what the actual leval runs on my p200 helps to run -winmem 100 before it though the level plays fine and cos it is a q3 level you would have to totaly change quake 1 to make it play like q3 which seems a bit stupid to me. So stop winging and start playing its going to my LAN party.

Keep it up Jeff, but maybe offer high and low rez textures...