Lilith is the latest level from the Russian god of mapping, Vondur. It is a small duel map done up in texture taken from Daikatana episode 3 (which I still maintain is a good game, give it a go). The textures are all castle/gothic textures which, when combined with lava pools and the streams of lava flowing from outlets in the walls, give the impression that you are in the halls of some Norse god or other.

The layout is a nearly symmetrical layout using two main atriums and two smaller anterooms that contain the two main power ups of the map (the quad and mega health) as well as either a lightning gun or a rocket launcher. The map is divided vertically into three floors, the upper two of which consist of half rings running round the edge of the atriums and some connecting corridors. 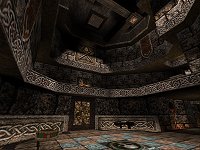 f each atrium. One has a set of stairs sending you up to the middle level whereas the other atrium has a teleporter and the red armour in a little side room. The item layout on the other hand isn't symmetrical, which means that making sure you know which of the two atriums you are in at a given moment becomes more crucial than ever.

There is also a ring of shadows hidden in traditional Vondur style, but I will leave it up to you to find it and I hope you have fun trying. I don't need to hope you will have fun playing, as I know you will.

it plays fast and furious, but 3 ppl is the absolute max player load. It looks real nice too.

... and found to be the very best map of this vondur thing. Perhaps i has been away of good old q1 too much, but i was shocked. Download now.

thanks for the comments you, 3 faithful users of my map.
excessus especially, since he managed to launch quake, being infected by quake three plague ;)

It cost me blood and sweat, but screenshots looked great, the level proved to be excellent, and the TXT was even nicer :)

how in the hell do you get ring?
ive been trying since the map came out

When you're on top of the GL, try rocketjumping into the sky (don't bump your head against the wooden beams)
Make sure the light fixture isn't in the blast radius because it is a button that can cause you a lot of pain =)