Reinc5 - Somewhere in the Vast 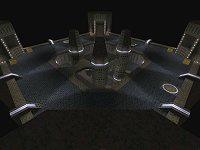 Note: The download is for all of the Reincarnation pack which includes 4 other maps.

A completely different setting to the previous Reincarnation maps, instead of solid ground, this piece is a floating high-tech style castle adrift in the reaches of what appears to be nowhere.

The internals of the castle are a bit maze like and you'll have to run around it a few times just so you can get your bearings properly. Bal's usual mastery of layout is here and you'd be hard pushed not to find a single area without at least 2 exit routes. There isn't a natural way (and by that I mean stairs) up onto the top most level but it is accessible by either teleporter or wind tunnel.

Fun can be had by camping (yes I should know better, slapped wrists etc…) at the top of the castle and dribbling grenades down into the ensuing battle below. I did find it a bit painful to play. Bots are a bit of a no 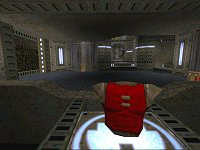 -no. Whilst they had no real problems navigating the map, they did seem to have a tendency to just hop off the map and therefore killed themselves. Duelling against a human opponent was far more favourable. My opponent seemed to like keeping to the ground floor a lot since the MH and RL are there.

Out-cropping panels containing various useful items made collecting them more interesting than normal and I did indeed get blasted off into the nether regions of space a few times. All this means is that you have to be a little more cautious when you go to grab them.

Normally I'm not a fan of floating-in-space-levels. I think they're a bit of a con because you don't have to consider things like connectivity. BUT THIS MAP 0WNZ.

It's the most original floating level I've ever seen, kind of a cross between the standard terra-firma set level and void based ones. Connection is masterful and the level generally looks finer than Christina Aguilera in cling film.

And its very impressive