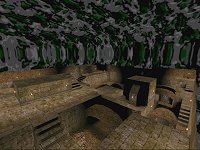 Sneaky. Very sneaky. Submit "Dazdm12 - Tomb Raider look a like", then after it gets flamed, submit this. You see I knew at the time of the first review both maps were done, it was just Mr Daz's cunning way of getting both his maps reviewed…

Well it worked. So what's new in the Special Super X Fighter Edition? For a start it looks better than the flat face Lego land style of the original. Lots of detail is in there from ripped up floor tiles to inset mosaic patterns on the walls. The setting is now night time and wall mounted flame torches have more of an effect on giving the map an atmosphere. Texturing has also been tweaked so it isn't so bland looking. Items have switched places, mostly armour and powerup switches which make a bit of difference since the MH is now more accessible.

There have been some changes to the maps layout, mostly in linking up the first floor of the map up so it isn't so disjoined. The ground floor appears to be unchanged, except for the inclusion of teleporters, which certainly help. Some dead end areas are now escapable which makes it far easier to move about the map.

The changes to the top level though don't seem to make much difference. The RA (was the MH) platform is a one-way trip down (unless you have an RL or GL) so you'll have to drop down to the ground floor to continue any further. 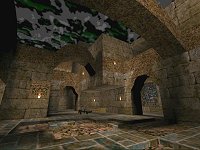 tely these changes have come at a price. There are a couple of spots where r_speeds can hit the almost crippling 1100 mark, and the average r_speeds in the upper section of the map is higher. There are also a few areas where it jumps from 150 to 600, which does cause a sudden jerk or a moment of slowdown.

The map does play a little better (heh GrindSpire - private joke) since the teleporters break up the otherwise mazelike static layout. The upper floor however, still isn't fun to navigate and now doubly so with the higher r_speeds.

Personally I would have kept the map to the ground floor and made it so you couldn't go up. It runs very reasonably in big FFA style on just the bottom floor and theres more than enough room to run about in. Ah well.