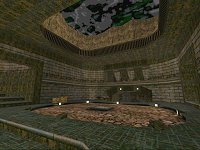 Waiting for this map to be finished was, at times, like Chinese water torture. Gonzo just had so many problems finishing it. But was it worth the wait?

Yes and no. Yes in that it looks really cool, but no in that it isn't exactly sparkling to play. The gritty, dirty textures from Kingpin and other sources combine to give a weird sort of gothic modern feel. It feels though like a demo map, something to show off an engine, what with the cool looking architecture spread about the map. Unfortunately the layout is essentially flat with 4, almost sparse, areas 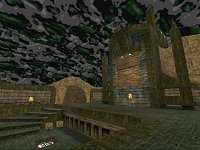 all connected together via a maze of corridors.

Lighting is subdued and not really apparent in GLQuake. In software it's a lot more defined and obvious.

Playing the map is, like I said, its down spot. It is sprawling and some parts of the map were left lonely and unused. The GL jump room was hardly ever populated (which incidentally gives teleporter access onto the Quad). Most of the action took place in the area in the second screen shot, with its RL placed dead centre. Strafing and dodging around this spot proves to be fun (so yes part of the map was a blast to play), what with armour and the LG just off from here. Just that particular section of the map would have been cool on its own.

What am I bid for Brown Paper Parcel...?

Our official press statement from id software is that Gonzo's custom map "Warfare 3" sucks ass and is an embarrassment to the gameplay we strove to achieve in maps such DM2, DM3, DM4 and DM6.