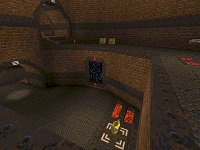 Think Da Pak style, with bluish GeN-style lights, miles of red brick and brown metal trim, some lava, and flourishes reminiscent of DM6 and DM2. Wrap about three two-level atria and that's the base.

Frankly, it's bland to look at. Some computer panels in the walls would have broken up the monotony; then again, the map runs like an express train, and that means Big Fraggies. Additionally the lighting seems too uniform and too bright; oh well, at least I can see who's killing m 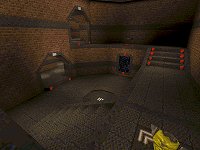 The DM6/DM2 flourishes are obvious: In one downstairs corridor are two moving floor panels you can fall through if you're not careful (just like DM2), and one atrium has a door in the floor accessing the Thunderbolt's hideyhole. From there you teleport out to the Megahealth position - just like in DM6.

Heavy metal is easily gained, and that means one thing: Carnage! This map plays incredibly fast and furious, and if you're bailed up in a corner you probably won't survive. One or two of those corners could do with clipping away, to be honest.

Nice map. Seems to be a first attempt by Morgoth, and as far as I'm concerned it's a good one.