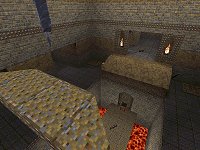 A brick map that's relatively plain in looks but piles on the hurt in gameplay. That's Violence 2 Silence in a nutshell.

The looks are simple: lots of pale blue brick with bands of pale yellow metal except where there are bands of large off-white stone. Lighting comes mainly from gratings, giving the place a slightly industrial air, which is offset by "barbaric" flambeaux in a number of places. I would've used a more contrasting texture set myself for the drama. 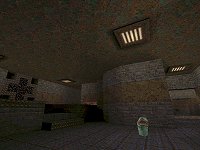 p>The layout consists of a main three-level atrium with Thunderbolt and Megahealth at the bottom (it's a dead end over lava, BTW), a scabbing of single-level pods and halls around the middle U-shaped level, and a top U-shaped catwalk with the Quad on it. Access to the Quad is by riding one of two trains, which frankly look bloody peculiar, but are excellent at thwarting Quad whores, considering one of the RLs is in that particular room!

Gameplay is a mixture of duking it out in the central atrium, looting the outer halls and knocking people into the hot stuff.

Hmm... I'd say this map is pretty fun, just not that exciting in the looks department.

Yes, of course you should!

Learn from your mistakes in the previous two maps...