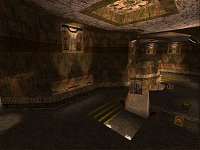 Killazontherun has made various DM maps for both Quake II and Quake III Arena in the past, but this is his first map for Quake DM. However his past experience does show through in this map’s layout and gameplay styles. The level is decked out in brand new, industrial styled textures from the Head Hunters 3 mod for Quake III Arena. Personally I didn’t really like the converted textures as they don’t fit very well into the Quake palette, especially the lighter textures as they all seemed to look strangely pastel like rather than heavy metallic rusting sheets.

The lighting on the map varies between very good and super fullbright l33tness in a few easy steps. The main area containing the mega health and the yellow armour is well lit with some nice areas of both light and dark and good contrast between the two. The other two smaller areas however are incredibly bright which is further enhanced by the lighter textures in these areas. It seems strange that when one area is well lit, the other looks like it was done by an upside down weasel with acute rectal difficulties due to having a 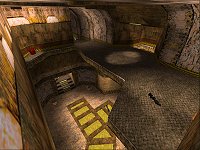 Having said all this however, I do like the gameplay on this map a lot, it really does rock. The weapons are spread well across the map with plenty of health dotted around for comfort. The armours are also spread out across the map nicely. My one problem with the item placement is that there is a slight lack of ammo, especially for the lightning gun, not enough to completely ruin the game, but enough to be noticeable.

I would still recommend getting the map as it is brilliant to play and the textures aren’t THAT bad. And it is still highly playable despite the lighting.

Well, I went to all the trouble of removing as many of the fullbrights from those textures as I could, so cheer up sir, it COULD HAVE BEEN WORSE!

For us software wallahs anyway.

Yeah, I know. I actually like the original Q3 versions. But I think it is because of the Quake palette, some of the lighter textures look like they have been drawn in crayon, and none of the textures look that hot.

#3. what? theres no intermission in this movie? ^

did anyone else notice that there is no intermission cammera location? causing the game to crash to the console

If there's no info_intermission, the camera defaults to the info_player_start location and looks due east.

And I'm sure that there's an info_player_start in here. Wierd.