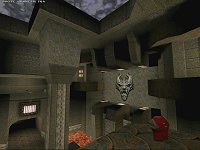 Holy epileptic fit batman! Slight understatement that, I was nearly f**king blinded by the near fatal usage of flashing light sources. Quite what Tronyn was thinking here I'm unsure? There is nothing particularly wrong with one or two light sources of this type, if used to provide some kind of atmosphere in a map, as in to show broken electric circuits or something similar. But to use them as the main type of light in central areas and adjoining cor 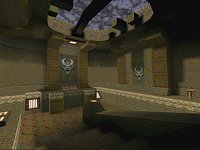 ridors of the map is baffling. I mean some corridors are pitch-black say for the odd bit given when the lights go on. All of this makes it a nightmare to get around the map.

Without them, you'd probably have a fairly decent map. The architecture is pretty interesting with some new variations in there for this type of theme… that is when you can see them that is.

It is a pretty large map and I get feeling that some areas could easily have been opened up more, and not make you think you're taking the long route all the time. Playing involved lots of wandering and pondering about wtf everyone was and so quickly became dull.

I have to agree with Paul here: The lighting ruins what could otherwise be a good map. Using lights that flicker a la flourescents to simulate lightning is NOT a good idea. Frankly, I'd have expected some research into using trigger_relays to pseudorandomly fire lightning "flashes". Sorry Tronyn, but that's the damn truth. I couldn't play the map as those accursed flashing lights hurt my eyes.

Apart from that, how on earth does one get the red armour apart from godlike rocket jumping - while you're at it, you could nab the Quad and become more or less invincible!

The use of Abyss of Pandemonium metal textures gives this map an original feel, although I did expect those demon heads to start spitting nails at me half the time.

The placing of powerups was well done - the Ring could be scary in here!

However, the lighting can only be described as Tronyn's Big Mistake.