The first impression I got from this map was that I was back playing a Tomb Raider level and soon enough the level of frustration I got from playing that said games sequels (the original was a piece of piss), where by I couldn't work out where the fuck the exits were and how to jump across to get that item and how to move over there and how to… bah! Basically it drove me bloody nuts. Unfortunately, my frustration could not be alleviated by jiggling Ms. Croft's buttocks around because obviously she wasn't here, so I just had to quit.

After calming down, I went back for a second playing session, which I hoped would be more successful. It wasn't.

This time around I did have the errr, layout under control but those poor bots did not. So I gave them 5 minutes to get up to speed. Things did get going, but you see the problem is this…

…as a representation of an archaeological ruin its prefect, decaying columns, scat 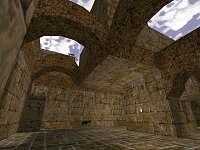 tered brick work, curved archways, etc. Unfortunately as a level it is visually uninspiring, it is bland, repetitive and practically coma inducing to look at. Those brick textures are horrible on their own! And the layout! Well, it is a prime pain in the ass. It is random at best. Infuriating at worst. Item placement is not so much bad, as just there aren't many items. Yes there are weapons, but there certainly isn't much ammo lying around to back things up.

Well I wanted a seasoned veteran's opinion and I got just that right :) Wait a few weeks and I'll see what I can up with...