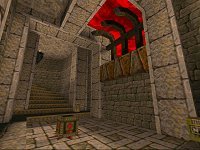 After the high tech piece that was Blackpope's Middle Finger, we have a Meso-American style map set inside a volcano, apparently. Boiling lava and precarious overhangs of land are obvious pieces of landscape to expect. Temple sized rooms with mosaic-patterned floors and rigid rock slab supports are also there to add to the maps visual appeal. Most of the structures in the map are very angular, with not a curve to be found.

As I've mentioned to BlackPope the map reminds me of Chesdm1 - Primal Etchings by Cheshire. The obvious link is the teleporters, but I'd swear some of the layout is similar, in an odd déjŕ vu type of way. Even weirder when you consider Pope hadn't seen chesdm1 before I'd pointed it out to him.

The layout consists of a central open-air courtyard with a ring of well-connected rooms and passageways. Movement is very slick, no lifts here but ladders and stairs connect up the various floors. There is only one air chute, cornered off in the room containing, amongst other things, a Ring of Shadows, LG and GA (not all in one place though).

Item placement is pretty cunning. The RL is on rocky ledge covered partially by a small passage, in the lower reaches of one of the volcano atriums. Lava slowly simmers away around here so you have to take a little care in netting it. 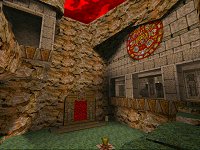 Power ups are also plentiful, as mentioned before the RoS is there, but so is the Quad and the Pentagram of Protection. Seems that people have gone power up mad recently.

I tried out both teamplay and FFA with varying success :). Doesn't take a genius to work out I preferred FFA, but with the distant placing of the items its very easy to get some tactics going to protect various parts of the map. In fact some areas have prefect spots for camping, errr, covering juicy items. It just depends on which you prefer.

So what didn't I like, well to be honest the look didn't grip me too much. Its cool looking but its missing something and I don't know what it is, if I knew I'd say so… I also found I was running around a bit too much to get tooled up properly before I could go into battle, which I thought was a pain in the ass.

One of the most beautiful maps I've seen, with some nice architecture and clever connectivity... just brilliant really.

felt very flat most of the time and the floor space is spread out alot. and i agree with Paul that the looks just didn't make me go "hell, thats a nice looking map"

some nice stuff, but just didn't grab me.

mabey its just me but i think the 'looks' problem is becuase there is little in the way of colors. The whole thing has a very 'grey/brown' tone. Also the 'rocky' surfaces didnt feel very 'rocky'

apart from that minor smidge, 'tis a very nice map

This spanish bloke Excessus used a similar theme with great results too in his exdm2 level... check it now on MPQ!