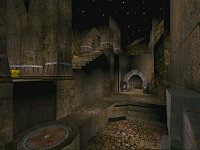 Sprawling layout. Gothic arches. Bounce pads. It must be a Q3a map? Not quite, this is fun to play (meeeeow!).

So after three publicly released versions (try beta testing next time ;)) we have, hopefully, a finished map, which does inherit a lot of its style from Q3a. The architecture is the most obvious thing with the large archways reminiscent of Peej's OMA remake. To be honest though I noticed little difference through the various released versions. The only thing I did notice was some better clipping so that bots didn't get cau 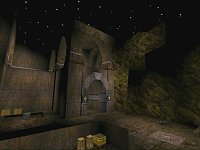 Item placement is the next Q3a-ism that's noticable, what with the GL placing, in combination with a bounce pad, particularly identical to some Q3a maps I've played. Also rockets and other items are tucked aside on some corridors and staircases. Beefy items such as the Quad and MH on the maps top most level so the top-level camping could be prevalent here.

Considering the large layout its surprising that play is rapid even if you're just duelling. The bounce pads work well, but the one that transports you to the RL is particularly brutal force wise.

The midnight setting adds to the gothic dark feel what with the gloomy texture set, all in all a nice diversion away from the norm at the moment.

Yeah I like this one lots: Nice atmosphere + great architecture + outdoor bits + diverse layout + good gameplay balance = fun. It's nice and easy to cane the bots around and smack 'em up places which is fun, and I do like the layout...good, but fresh too. The only prob I have is that it's a bit too dark in places making it bloody hard to see what's shooting you. The SNG pit near the RA is the worst place for that.