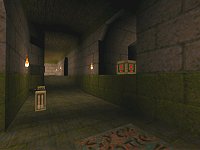 Not sure if this is Deathmonger's first map or not, if it is then it's a good effort. The setting appears to be an indoor set of sewer like grime-ridden corridors and alleys. It's a two tone in colour, with nice clear, cream brick textures on the upper parts of walls, whilst a mould and green slime style texture hugs the lower parts of the wall.

The maps build quality is good. No misalignments, no overhangs in the architecture. Very simple, solid stuff. There is some detailing, with grates inset on some of the walls. Lighting is amble, what with flame torches adorning the walls. The crackling noise they make did quickly get on my wick (ie, it pissed me off). Once things get going though, the echoes of rocket and gunfire soon took over.

At first I thought the layout was perhaps a bit too mazy and unstructured. It may not be the slickest layout I've seen but it does seem to work and surprisingly, it's an intriguing map to play. Some of the item placement is excellent which makes things interesting.

As an example, the MH (and RA) placing is in a corridor that runs parallel to a more open area of the map. The MH sits at the end of this corridor, which cannot be quickly reached (other than by rjump/gjump). To get at it you have to run up a sloped incline and then into this alley. If you then he 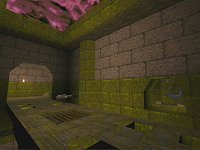 ar someone going along there (by picking the armour up) you can fire off rockets at the perched MH and nail them as they fly around to get it.

1-on-1 was first up and even though it is not a small map, it's easy to hear what your opponent is up to. Sound queues come from mainly either the water in lower section of map, the teleporters or lift. There are quite a few openings and windows in the corridor walls, so having a stray grenade gib you shouldn't come as a surprise. FFA play means you have to on your toes more due to the maps small spaces.

All in all, it's an average map. If Deathmonger can maintain the same build quality and match that with more variance in architecture and styling then we should be in for some interesting maps.

i thought it was at most worthy of a 4

ProdigyXL's "Say It Ain't So" got 3.5 and in looks department, and this is no offence to Deathmonger, its far superior. This map is just bland to look at. It may play ok but its really lacking as far as architecture goes.

Looking forward to it.

I think Paul has been fair with his review! When I look at this map I tell myself: "what where you thinking of, man!". So I think a 2.5 is more than I expected from this map.

Stay tunned to Thy Fears Unleashed! Next month at theaters near you!.