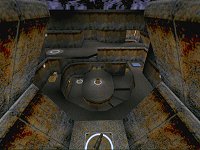 The first thing that struck me was how repetitive the texturing is. So much in fact that after extended play it induced a headache. The texture itself is fine, it's just very, very overused. Some variation would have been very welcome.

Unfortunately, it does get worse before it can better. The architecture is a bizarre mix of very angular and smooth curves. There are also some very weak looking areas in there 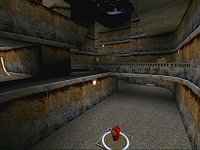 that just do not look right.

I did say though, it got better. Considering the maps almost odd layout because it appears to be too big for 1-on-1, but actually isn't. It's a blast to play. There are some pretty spacious areas so strafing about is possible, making for some tense moments.

Weapon placement is ok and it has to be said that the LG is lethal here. Sitting on the MH and RA spots you can just track and nail others as they drift down from the upper levels. This is a tactic that doesn't work too well with a heavy player load since you can't keep your eyes peeled for everything.

I remember I played this level when Blackpope first released it and had lots of fun, the bots semed to work fine, exept for the RA camping routine :) Apart from that I would say that the author combines quite good open and not so open areas and overall it plays great! Can't say nothing about 1v1, never tried...

...nvr seen the map in GL... but from the pics I can say it looks alot diff from software... It felt alot gloomier and darker....but yah more txture variety woulda been smooth... but for less than a nights work... Im happy with it... I just wanted somewhere to frag with a buddy of mine.

and actually have it up on my server ;-) The gameplay with 4 is very exciting.